The power of Music

“Without music to decorate it, time is just a bunch of boring production deadlines or dates by which bills must be paid”-Frank Zappa


Hello, I know it has been sometime since my last post. After posting my first video in a blog, I wanted to give people sometime to soak that one in. Even though I know many of you do not play an instrument. This video was shown to co workers and many admitted that it seemed almost alien to them. Nevertheless, I will make more in the future & this entry has its own video as well.

I did want to touch a bit of the reality of being a musician.This is one of the most misunderstood professions in existence. People often depict a musician as arrogant, yet expandable at the same time. I recall once I was in training class at my job with some guys that were a bit younger than me, pretty straight laced,car enthusiasts types from the suburbs. I remember one of them talking about a friend who was involved with a Girl who's Father was a decorated War hero. Her Brother also received a medal in Iraq for saving lives,and when asked what he did he said "I'm a musician". The person telling the story had insiuated that in comparison this was a very minor role this "musician" was playing in society, as he chuckled. Of course I wanted to verbally Bitchslap him. However, I realize it would be a waste of breath as I can't make people understand my point of view(no matter how insulted I was).

I could however had reminded him of the past, the Vietnam War for example. The power of music helped stop that War.Today the efforts of the radicals are still misunderstood, but most had no issue with the soliders themselves. The protests were against the Government who sent people to die for their cause(which as you know still goes on today). Let me put another image in your head: Imagine your favorite movie or video game without ANY music. And not that you want this image in your head,but im sure many of us would not be hear without music setting the tone in some way. People still go out and dance,looking to meet that special someone. Music oftens helps us intensify these feelings,makes it so we can say things with our hearts that our minds can't say.Have you ever heard a song & said "this is what I was thinking" or "this is how I feel". So, I'm sure many of you out there are familiar with the phrase "our song".

With technology the floodgates have opened to allow many more artists to emerge. However, it seems like their is an oversaturation of this. Like in the past artists, must not only be talented but also stand out amongst the masses. This is partly why I decided to create this blog. I did realize early on to learn the business end of Music and handle promotions in a mainstream fashion,while booking our own tours and handling our own press(despite naysayers attempting to convince I shouldnt be doing this,nice try).

For those of you that do play & write music. Realize that you have a gift,a gift that can help you express how you feel when words cannot allow you to do so. Understand, that is your art and you have a chance to take it as far as you would like to. Never let anyone deter you from your love of music. Most that try to do this are usually to afraid to do so themselves, or jealous in some way that you can. Learn the business side(and make it work for you) while keeping with the trends in the business. Yes, Hendrix never needed to make a blog but the world the music industry was much different back then(how many bands curerently release singles or a whole album every 6 months?).Be proud of what any progress you make,but work for it. That means pratice and write as much as you can.


Thanks again for reading, and if you can please come down on Saturday and watch us. We made a little promo video to help promote the event. Like I said, keep up with the times. I think they used to call these commercials,right? 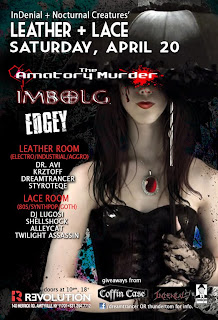 Posted by Unknown at 8:10 PM No comments: