No Man is an Island

Hello everyone, I know that I have been absent for awhile now. But in the midst of this incredibly long winter(that is officially over and refuses to die) It has been hard to go out and enjoy life, write or perform. Although I did manage to perform recently with my Bass player, Lynn Haze at the Dorian Gray party here in NYC(see pic below). I have been busy finishing up two releases, and a long work project so that I can fund the things I love doing. Not to mention the Indie Gogo campaign we created has been keeping me occupied. Like anything else it has been an uphill battle and in hindsight I wish I had done more research before beginning the campaign. However, We are still struggling to make our goal and those who donate will receive perks such as downloads, keychains that our bass player Lynn Haze is making custom, and the most popular perk : pre-ordered copies of albums from Imbolg and Of Beauty and Madness. You can find out more about our campaign and how you can contribute by visiting Our Indie Gogo Campaign Headquarters .

I thought early on that completing the video for the campaign and researching the differences between Kickstarter and Indie Gogo were the only key elements to the success of this campaign. Boy was I wrong, luckily I have a background in sales and booking that came in handy. As I needed to know who to ask up front for a donation, and who not to ask at all, and all points in between. Also I knew that I couldn't be pushing this on my own, so I created a campaign team comprised of band mates and long time supporters. Which I know not all have a sales background, so I needed to coach them as well hear any feedback that they have to offer. Either way this is a group effort and I am still amazed at all the support we have received and unfortunately by the few people who have no responded even after we have helped them. After all, as I have stated previously the music industry is give and take. And if all you are doing is taking and not giving then you have basically dug your own grave since people will take notice of a selfish attitude. It baffles me that for some reason people's ability to perform and play music gives them this idea that they are better than other people. And this goes for many people who act and model as well. However, I did come to this conclusion : "Your Talent and Beauty exist to touch hearts, it is not meant to close your own and make you look down on others" I truly hope that this (if anything) is what I will be remembered for above all else and at the very least deflates of the egos of some people that are "legends in their own minds". It is well known that once any person that gets a small taste of success becomes difficult to deal with, that they are is seen as unprofessional and not worth working with. I need to once again refer to the King, Elvis Presley who was more successful than any of us will ever be. Yet he was one of the nicest, kindest and most generous people in existence.

The point I am trying to make you realize is that you are not alone in this struggle to the top. Hence the title of this post : No Man is an islandor Woman for that matter. Of course we need to take care of ourselves, however things work best when many people work together and benefit from the hard work. And helping out your fellow artists doesn't take as much effort as you think. A simple repost? a reply to a question asked for advice? checking out their band? Trust me, none of these things will kill you and if you don't do these things and wonder why no one supports what you do than you have bigger than I can help you with. As I stated in an older : Set the Bar for yourself,this is how the Seattle Grunge scene in the 90's come about. Of course not everyone will reciprocate, but don't beat yourself up over it just remember that for next time and devote your attention to yourself or another person that did reciprocate or helped you initially. To prove that this theory of mine works, I would like to invite any of you that are artist of any type to join this group: Artist DIY marketing Co-op I have received many likes join my pages, and even received a donation to my Indie gogo because of this group. It works on the premises I just spoke of, everyone supporting each others efforts. The creator of this group, Jim Rose is the only one who can post on the group page. However anyone can comment on his post with there own link that is appropriate to put on that post. For example, Jim will post asking people to comment with their Facebook fan pages, or merchandise pages,twitter,etc. People are supposed to go through the previous comments, like the pages, then comment with their own link. Those who just comment with their own page and don't follow the guidelines get removed from the group.

I hope this will give everyone a better perspective on the whole networking and community aspect of being part of a live music scene. Each person that works hard has something unique to bring to the table and we can all be inspired by and learn from each other.

That being said, I thank you all for reading again and please try to not be so bogged down that you can't take the time to appreciate what your fellow artist is doing. Here's a pic from the most recent time I was onstage, with Lynn Haze at the Dorian Gray party, held every Wednesday night at the Bowery Electric club in New York, NY 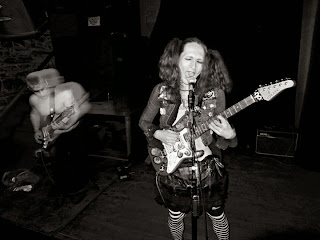 I think I told you I can move so faster than the speed of a shutter right?

Posted by Imbolg at 9:08 PM No comments: