The Elder: an exclusive interview with the NYC Dark scene's own DJ Patrick 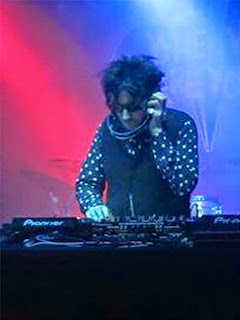 Hello everybody, after my last entry I need to show everyone how resilient the life of a musician can be and how the next day can bring about great changes. So after a few deep breathes and listening speeches/watching scenes from Rocky, a movie that always lifts my spirits I decided to focus on some very great upcoming events I am involved with.

Very soon it will be my Birthday, and I will be fortunate enough to be performing at that day. Also, I have been lucky enough to coordinate the special day so that the Imbolg Record release party will be on the same day at a very great event here in NYC known as Salvation, which was created by none other than Joe Cyn, and the NYC Goth scene's most tenured DJ: Patrick. This is truly a great honor to be a part of this event, as excited as I am I still managed to come up with some questions for Patrick regarding his events and his very prosperous 20 year plus career as a DJ, here is what he had to say:

Nate: Have you ever played in a band?

"I never played in band. I've never had the patience for all the practice it would require. I've always been highly critical of mediocre bands (which are overflowing in the Goth scene). My own standards would be impossible to live up to. So it would be kinda pointless."

Nate: When did you start to DJ?:

Patrick: "I started DJing in 1992 at the basement of the Pyramid. It was an event called Stigmata. They had a second room and wanted it to be all Goth. The first DJ's they hired were extremely pretentious and adhered to a strict dress code. The door person literally told the promoter he couldn't come into his own party because of his attire. They got the boot and I was in.

Patrick: "Becoming a DJ was never something I sought out, it just sort of fell into my lap. I was going to a party called Troublemaker at Mother on 14th street. The Late DJ Reese would include a lot of Goth in his sets. At this time all these great new Gothic bands were coming up (Rosetta Stone, London After Midnight, The Wake, etc), but they weren't getting spun in the clubs. I started bringing the early Rosetta Stone 12inches for Reese to play. The party's promoter Craig realized that I had a bit of a knowledge about the genre and asked if I wanted to spin at the new party he was doing."

Nate: Who taught you how to Dj?

Patrick:"When I started it was still only vinyl at most clubs. I was given a crash course on my first night and picked it up from there. I'm still not proficient with the technical aspects of DJing. I wouldn't know the first thing about setting up the equipment, but no one has picked up on that in my two decades of doing this. I think song selection and good taste in music is much more important than technical savvy anyhow."

Patrick: "My favorite classic Goth bands would be Christian Death(with Rozz[Williams]), The Cure, Siouxsie, Clan of Xymox and all the usual suspects. Although Devo is my favorite band of all time. It's all about the music that catches you around the age of 13. As much as I love a lot of new bands, I don't have 30 years of memories to go along with them, so I'm stuck with Devo. As far as more recent Goth or Dark/Post Punk type bands. I love The Exploding Boy, Sleepmask, The Soft Moon and Lebanon Hanover. There are a lot of bands on the periphery of the genre that I love (Cold Cave, Light Asylum, etc) but a lot of newer bands that embrace the Goth tag and actually fly the flag for this type of music usually suck. I listen to some of these acts and I feel like I'm listening to a comedy recording. The vocals are so deep that it becomes ridiculous and makes the whole scene look like a total joke. I'm being polite today, so I won't mention names."

Nate: What are some your favorite places to spin at?

: "I don't have any favorite places to spin, just as long as the sound system is descent and they have room in the DJ booth to spread out my CD books, I'm fine. I'm very low maintenance."

Nate: You recently attended the Wave Gotik Treffen Festival in Germany, can you tell us a bit about that?:

Patrick: WGT is the world's biggest Goth festival. It covers everything from Goth rock, Deathrock, EBM, Industrial, Post Punk and even some Gothic Metal. It basically takes over the entire city of Leipzig for 4 days. This years lineup included one of my favorite band The Marionettes. They have been inactive in recent years, so It was great to see them live. They have never played the states. There are other festivals around, but this is the big one. I always liken the opportunity to DJ at this event to an Oscar nomination. It's a great honor and I've been able to do it twice. It's one of those times that doing all this work for the scene over the years actually pays off. One of the best DJ experiences ever."

Nate: Past club events you have Djed at?

Patrick: "I've done so many events that it would be hard to list them all, but I'm probably most known for The Bank during it's peak years in the 90's, Communion at the Limelight( I was there for the last 9 months) and Albion/Batcave at Rebel. Salvation is about to have it's 7th anniversary, so a whole new generation is familiar with me from that party. It's unbelievable that some kids coming out now that weren't even born when I started doing this. I've had a regular residency at some club or another for 22 years running. No gaps whatsoever. I'm pretty proud of that streak.

Nate: Please tell us about Salvation(how did the party come about and what can people expect when they go there?

Patrick: "Salvation came about because Albion/ Batcave closed. It was the biggest Goth event NYC ever had, so it was missed when it ended. I was going to a Hipster venue and realized that the Saturday night was floundering. I asked the manager about it and he gave me one Saturday to throw an event. I contacted two other Albion DJ's Cyn and Templar and we laid out the plans. Templar left after a few parties, but he still guest Dj's at every anniversary. We try to keep the party focused on the music. We don't do theme night's and rarely use guest DJ's. Cyn spins Industrial/EBM and I focus on Gothic Rock and some New Wave. We try to keep the playlists current, by spinning a lot of new bands, but we also haven't forgotten the classics. You can expect to hear something familiar, but also something new and maybe something you haven't heard in a while. At least that's what we hope the experience will be. We are both pretty open to requests, so don't be afraid to ask. Sometimes the request is better than what we intended to play.

Salvation is held every month at the Windfall Bar and Grill located at 23 west 39th street in Manhattan. For more information on this upcoming Salvation please click here to see the Official event page and be sure to join the: Salvation Facebook Group for information on upcoming events.

Thanks again for reading and hope to see you on the 28th, Nate
P.S. here is some of what Patrick witnessed this year at Wave Gotik Treffen, enjoy: