One Man's trip to NAMM 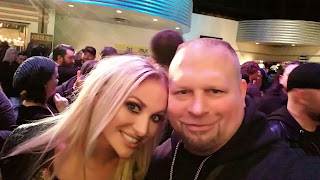 Mike Repel with Heidi Sheperd from the band the Butcher Babies

For most musicians, especially us "gear heads" this past weekend is like a second Christmas. This past weekend the NAMM show was held at the Anaheim convention center in Anaheim, California. All music instrument manufacturers showcase their new gear including products that feature the latest technology (such as recording software).From new guitars to synths,drums,saxophones and much more. Along with new product demonstrations you can also see live performances and appearances by many of the industrie's top artists. Most of us (myself included) have to patiently wait for the new products to hit stores, and hope to catch a few highlights of pics and videos online.

I was able to pick the brain of a friend that attended this years show. Mike Repel, Lead Singer/Guitarist for the band "Riotous Indignation" and author of : The Music Industry Self Help Guide which is a very good read (a must for anyone crazy enough to consider a career as a musician) Which is now available at Sam Ash Music Stores and on their website. In keeping with my alternate title for this entry: the blog post that wrote itself, I'll let him take from here and (for those of you that don't know) he will tell you what the NAMM acronym stands for.

"After 5 years with no rain, it seemed to all come down the one weekend that I decided to go to California. I could of stayed in Chicago for that bullshit.

However, even though the weather was not optimal, the rain itself was a small inconvenience compared to the awesome weekend I had. As many of you know, and also as many of you don’t know, NAMM (The National Association of Music Merchants) is an invitation only event. For those that are able to attend, the place is an absolute madhouse, and it can pretty much be described as walking into a mile long Sam Ash Music Store or Guitar Center. This is the official trade show for new music gear and music products. There is so much to take in at this event that even if you spend the entire 4 days there, there is a good possibility that you won’t see everything on the floor. I estimate that I walked about 8 miles a day in the convention center, and it seems that this may be average based on a conversation I had with someone who was wearing a pedometer that registered 22,000 steps for his day. There is literally that much to see.

Among some of the newest and innovative toys available, I have seen some things that are absolutely needed in today’s industry. We currently live in a time where impoverished criminals are desperate and emboldened and are targeting touring musicians’ vans and trailers. We all know someone, or some band personally that has been affected by this, and if it has happened to you directly, then you know the soul crushing and gut wrenching feeling of loss that the theft of your musical equipment creates. An item to keep a look out for is by a company from GearSecure.com; a company that embeds GPS tracking chips deep into musical instruments in places where they cannot be removed without destroying the instrument. I had an opportunity to speak with Rob Meives who launched this product which has a battery that lasts 25 years and a GPS tracking ability that can locate your instrument or gear within 10 feet of its signal, anywhere in the world. You can find information on Gear Secure by searching for the Hashtag #TheEndToLostOrStolen.


Without getting into all of the gear that was available, mostly because I am tired, and I am waiting for my connecting flight back to Chicago, there is a myriad of celebrities, friends and acquaintances at these events that make this annual trip worthwhile. As a musician, there is no other place that I could think of where you have such a large gathering of like-minded people who are all active in their careers. There is something about being around a bunch of people all weekend who are on the same wavelength as you that absolutely recharges your batteries.

The whole place is a massive meet and greet and with scheduled live entertainment on and off the convention center property, there is something for everyone to do. Schecter Guitars had two events that I attended which were an absolute great time. They had a packed house on Friday Jan 20th at their independent artists party at The Juke Joint in Anaheim. The bands at this event were all Schecter sponsored artists and absolutely kicked ass, one notable act that absolutely slayed the place was a group called Fracture (find them online under Fracture818). As good of a time as this was, it could not describe the blowout party Schecter had the following night at the Grove Theater of Anaheim. Co-Sponsored by ColdCock Whiskey, this event was packed to the gills with artists and attendees from all over the globe. Kyng, Kings X and Zack Wyldes “Zakk Sabbath” played inside while a DJ spun metal all night in the courtyard which had gas burning heating towers and bars serving ColdCock whiskey evenly distributed to ensure the crowds warmth. 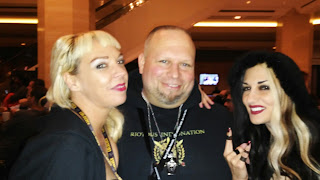 Other than the fact that this place was filled with cool people, and some of the most amazing looking women that were occupying southern California this weekend, one notable thing to mention was the thick cloud that hung over the courtyard. This cloud was not a weather related event, but rather a man made by product of California’s relaxed laws on the possession and consumption of recreational Marijuana. This relaxed atmosphere allowed everyone to have a good time, pretty much on their terms. I had a great time and recommend that anyone with the wherewithal to do so makes sure that they attend this event if they get the opportunity to do so."

For more information on what you could have seen this year at NAMM please visit http://NAMM.org
And be sure to check out Mike Repel's Band Riotous Indignation here:

Posted by Imbolg at 1:41 PM No comments: