Tell me what you want 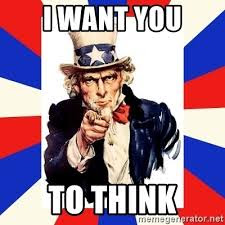 Hello all, please don't let Uncle Sam make assume what this is about. Because this is NOT by any means a political post. Many of you know that I never post about that topic,but still just needed to inform you. After my last entry I decided to pause for a little while in hopes that what I was saying would seep into the hearts and minds of those willing to listen. Not to mention, even though we've been inundated with plenty of updates and theories since then, what I spoke about previously is still a current topic.

This is easier said than done of course, but instead of allowing what's going on in the world and everyone's opposing views to suppress me, I chose to take a chance at gaining some new momentum. Even though we are all in this together, which has even become sort of a slogan it's quite obvious that people deal with this very differently based on their own personal experiences. I for one, have grown accustomed to extremely long periods of delays in progress and stagnation. Mainly due to my past experiences trying to get my albums recorded and being forced to deal with individuals that didn't share my passion and were not nearly as motivated or took any pride in the finished product as I have,even though my last album charted. I won't dwell on that, except to point out that I did learn my lesson and I left those who try to hold me down in the past as their attitudes that have rightfully served them (karma wise) since they accomplished very little in the music industry. I do admit that I had the blinders on when I saw that people were simply just going along with everything the news media have been telling them to do. This is of course because I have seen time and time again how we were slowly lead to where we are right now.

After choosing the title of my last post, the song the title was taken from reminded me of where I had heard for the first time on the show the Wonder Years . If you haven't seen this show yet or need something to watch right now(please don't make me say the Q word)I highly recommend it. I found myself rewatching it again, as it was always a favorite especially since I was the same age as the main character when the show first aired(and like Kevin and Winnie I had my first kiss at that age too). And surprisingly enough, at the start of one episode they even mention my hometown Ridgefield Park,NJ.So I naturally identified with most of the subject matter(even though it was set 20 years earlier). Looking past all the reminiscing and the tear jerking finale (whether you admit to it or not),which aired exactly 27 year ago yesterday. A fact reminded to us by Danica McKellar (who played Winnie Cooper on the show) when She posted on TikTok. I found out I always try and dig further into any form of media that interests me. I think learning about the inspiration for a show,a song,book,etc. gives me a better understanding of how it was created. Even though I admittedly get too engrossed in shows or movies at times this show pointed out a few key things we usually end up learning on our own and sometimes later than we needed to. One thing in particular is:

Life never turns out how we planned it

Look at what is happening right now, who would have thought last year that we would be living the way we do. Human interactions are almost non-existent and may never be the same as they once were. That is what truly scares me.

My words and videos did cause some controversy and I know that it was directly caused by our pre-conditioning to "Social Distancing" and these other mandates. Not to mention people's lack of examining an issue as a whole,which causes confusion and accusations. I know most can relate to how things once were before the internet,cell phones,social media and what not. As these things and other technology became more advanced and part of our lives,people started to grow further apart. Ironically enough as they make it easier to communicate. Or so we thought. Plenty of messages get lost in translation within a text as opposed to over the phone or in person. You miss vocal tones,cues and body language. Let's face it, in many ways to art of conversation is dead or at least on life support. Any Woman that has been on Fakebook(not a typo,see my last post) and received a message from a random guy stating his desires in a vulgar manner can attest to this. On the upside live streams and video messaging may bring communication back to where it once was, but there is still much to be rediscovered. I also recall seeing a post from a friend about how She spotted a guy She was attracted to on the train, but She went unnoticed because He was too engrossed in something on his phone. Imagine what could have been "if only".

We all have our own lessons to learn and things we will take away from this time. As I stated before,even though we are all effected we are still divided. I hope this time has that at the very least caused many inconveniences as a consumer, if not death or unemployment helps us learn some gratitude for the simple things. Things that were so easy to obtain just a few short months ago are unavailable or delayed. And of course I hope it also forces you to ask questions,not just about this situation but to yourself and to other people. As a musician who hasn't had the good fortune of a deal with a major label, a close relative that has obtained success themselves in the business or being born into a wealthy family I have had to rely on honing my craft,educating myself and building good relations with anyone I meet. Telling people what they want only works if you have millions to advertise on every tv network,radio station,billboard,magazine and perform in as many places as possible.Let's face it,we have all been sucked into mass advertising ploys in some way,shape or form.

I recall attending a show and introducing myself to another singer I knew of,only to get a quick hello and a button handed to me before being dismissed. Obviously,that button was never pinned on my jacket and got lost. Simply because in this guy's mind that was all I existed for. Just another face in the crowd to support his art,which would obviously not be reciprocated. In turn, I recall speaking to other artists who both appreciated my questions and admitted they were craving a conversation about what moves them and the chance to explain their motives and inspirations. This reminds me of the night I met Tina Root of Switchblade Symphony many moons ago at the Wetlands in NYC. And the same night I met Peter Steele of Type O Negative. Unable to locate a marker to ironically enough have him autograph the shirt I was wearing which I bought the last time I saw him perform live(if memory serves me correctly and anyone who knows me knows that mine usually does) I got a simple "Good luck" as I told him that I perform in a band too and watching him raise his head back up to standing straight from crouching down to speak to me, a guy who barely came up just past his elbow and wished him a good night as to not be a nuisance. Just figured I'd take the opportunity to finally share that with all of you.

So as to not overstate the point I was trying to make, I urge all of you to "Tell me what you want" in the comments section below. You are welcome to comment below or if you feel it's too personal or something you can't answer right now, tell me later or Just go after it! Knowing what you want is empowering and will protect you from just going along with what regiments are thrown at us (sometimes) under the guise of safety and your well being.Now I already told you what I want(even though Uncle Sam told you for Me) so I am really looking forward to hearing what you have to say and what I can learn from all of you.

I will leave you with the song that helped me create this entry by the band Zebra whose lead singer, Randy Jackson I also had the pleasure of meeting at a local charity event for the USO

I hope you are doing well.Until next time, stay safe everyone.

And here's a quick intro to the Wonder Years