The Point of No Return

So there I was last week, watching a live stream of a music conference that I must tell you was truly a Godsend. One segment in particular, In which the panelists were speaking about how you can give up your day job and do music full-time. This is been pretty much a lifelong goal of mine and I really wish that I had chosen to be in the company of those who felt this way too. It's a real struggle when you're forced to do something outside of your preferred profession in order to have a roof over your head and food on the table. So, like most people after a certain point many of us just except it as a fact of life and "drink the Kool-Aid" if you will. Sadly enough, it's something I've watched many of my former bandmates do. And in some cases it led them to getting toss the aside bye the employer they showed this loyalty to when they were deemed useless. For me, this journey is a series of "what ifs". What if I choose to do things more independently, whatever I had fine-tuned some of the music I made before releasing it or what if I had decided to get a better job? Would I have focused on that? Or what I have used the extra income to fuel the music? At this point it's neither here nor there, there are certain things in life that I have sacrificed and I will do everything in my power to make sure it wasn't in vain. Afterall, life is all about the journey and not the destination. 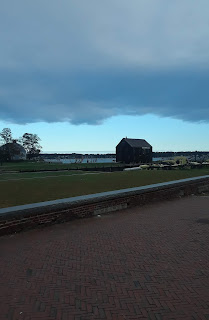 Just a pic I took of the part of the Harbor in Salem,MA where the ferry to Boston stops


If you've been reading my posts, you will know by now that this is the part where I talk about the title of the post. And for me, that's what I see this as. After doing this for so many years, investing all this time and money and building connections the only wise thing to do would be to find a way to make it work. There's always parts of the day where I feel like I was foolish, I wasted years and years of my life doing the stuff that goes unnoticed. How can I not feel that way, when I've played to empty rooms in my hometown, and I'm expected to go out and then nag people to buy tickets so there a promoter can be able to afford To pay the headliner. And in many cases, the local who is working for nothing or for peanuts draws a much bigger crowd than the hyped up headliner who is passing through town. Then on the other side of the coin, when I actually go out and engage people in person or on social media the few people that recognize and appreciate my work make all the crap that I go through well worth it.

So you might be asking yourself right now, when exactly was it that I decided that I was at the point of no return? Or you may be asking that about your own life. For me it may have been when I decide to start Forever Autumn Records, since I knew we would be distributing and promoting our music nationally. And despite the pitfalls I have encountered with dealing with plenty of the wrong people, I have done just that. Our releases are available in many stores around the country. And I can proudly say that it's been solely by my efforts alone. It's been great getting to build relationships with several of these store owners, picking their brains about their local scene and reassuring them that I would do everything on my end to cross promote for them. Just this past weekend, on our trip to perform in Salem, MA We dropped into a few stores along the way making sure that they had our releases, as well as the poster to promote the new album the Sorrows 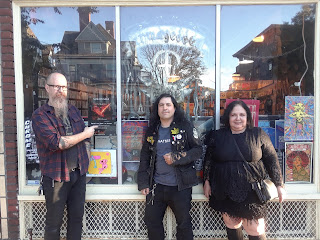 This is me and our new keyboard player, Hannah Stejnbok with Ben of Armageddon Shop in Providence,RI


So all in all, it was a trip well worth taking in investing time and money in. I got to take my truck out on the open road and listen to some Led Zeppelin(which has become somewhat of a ritual for these trips up north) and of course some other classic rock, including Electric Light Orchestra which I had mentioned in my last post but didn't include a video at the end. Which I will this time. So I suppose the time spent getting to know my new band mate and seeing the sights of Salem, well making acquaintances with some other people who just happen to be in town,including the other bands that performed that night with us Cruz Machine & Metamorph. I'm sure if I was slaving away at some job putting in 60 hours a week and being at some corporations backing call to stop what I'm doing and rush in to help the business stay afloat, none of this would have been possible. I may at some point discuss this past weekend in further detail and add more pictures. But for now, I bid you farewell until next week and if you are in a band or know any bands that are trying to be featured in a Blog please send them my way.


I chose this particular ELO song, since it's the latest one that I'm learning.


And of course there's never a bad excuse to post some Zeppelin :

Posted by Imbolg at 7:13 PM No comments: