Showing posts from February, 2014
Show all

Jack of all trades

February 15, 2014
If you have read the past few posts I have made you may start to realize that being a musical artist isn't always about writing and performing music. Especially if you are a DIY or an independent artist. You have to be your own booking agent, manager, tour manager, publicist and sometimes even your own record label. These dual roles or "wearing many hats" is not easy and sometimes your performance can suffer as a result of it. Many managers also have law degrees, but do not practice. However their education in law helps them read and write contracts for their clients in order to be more effective as representation to their clients. If you would like more information on this topic, I suggest reading this book on Music Law . Here is a musical fact you may not know: Huey Lewis of Huey Lewis & the News actually managed the band he created. Dual roles in music are so common that nobody even gives them a second thought. How bands do you know engineer their own a
Post a Comment
Read more

Behind the Booth: an indepth look into the world of the DJ Featuring interviews with DJs Ian Fford & Alex Von Nihil 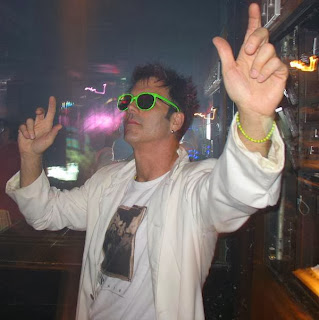 As you probably guessed, this entry is dedicated to the DJ or Disc Jockey . Technically they are not musicians, however they are a big part of the music industry and club circuits. They can also help further a musical artist's career by playing their music on their show or during their club sets. So it's a good a idea for bands to work along side of and cross promote Djs (as I stated in the past the business is give and take, you should help those when you can). I mentioned in previous entries most radio play is handle through a radio promoter, however it is in most cases ultimately the Dj that decides what songs get airplay. Like musicians, these Guys and Ladies usually focus on a specific genre of music and in many cases develop a style and personality to add flair to their overall appeal. In some cases have even established a certain "rockstar" status by making a name for themselves after years of spinning at events geared towards the genre they chose to spin. For
Post a Comment
Read more

February 01, 2014
Hello again everybody, this entry I will be focusing on running a smarter campaign to avoid the backlash overdoing your promotions or (worse case scenario) being labeled a "Spammer". Yes, people do throw that and many other terms around too loosely, we all do. And I admit I have been guilty of overdoing posts in the past. But instead of defending myself and starting arguments I decided to evaluate how I was going about spreading the word about my music and this blog while sharing what I learned with you. Your goal when being on social media is not just to get people into your music music but also, entertaining them or engaging them with an interesting post, like a picture you took or asking them a question about a music related topic. Make it interactive and not just about you, people will respond more and, to quote Bill Cosby but you may even learn thing or two (Hey Hey Hey). Yes it can be nerve racking to think that so many bands are out their posting their music and you
Post a Comment
Read more
More posts