Showing posts from May, 2014
Show all

Most likely the MOST messed up band story you'll ever hear 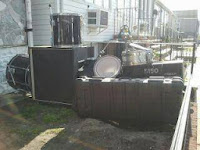 Hello everyone. I know it's been nearly a month since my last entry. I have finally finished the Imbolg album. It is a great weight off my shoulders. Now I have plenty of work to do to promote the album and get the band back out performing shows. This has also meant that I am no longer working with the band Of beauty and Madness . As many of you know our lives have many turning points and things sometimes "run there course". However, it always best to see this early on and try to settle matters civilly as I had attempted to. Unfortunately, we have no control over the actions of others and my former partner at Forever Autumn Records and band mate grew to resent me due to his lack of time and inability to accomplish the things we had set forth to do together. I found myself taking on more responsibilities than I had bargained for and my efforts were unappreciated by all who are in the band, simply because they have never been in a band where two members are seasoned and k
Post a Comment
Read more
More posts