Showing posts from February, 2017
Show all

Life Lessons from the Miner 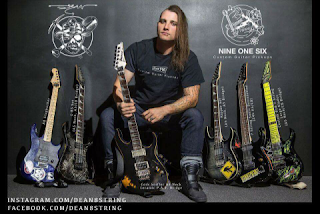 A mutual friend had told me that Dean was about to start promoting his new solo project, along with their debut album "Life Lessons" and his new company: "Plan 916" where with the help of Owner Matt Kustom he has developed his own signature guitar pickups. This prompted me to listen to his new album and get some insight into how he formed this new project and his history as a musician Brandishing a persona that appears to be a hybrid of Johnny Depp and Stone Cold Steve Austin who happens to know how to shred on guitar, Dean has been performing live since 2002 with his first band,which was formed in the previous year: Eyeless ,and then with Deathstick,Verfallen and Salvage . He then went onto tour with more notable acts like: The Independents,Black Cat Attack and Darrow Chemical Company and currently is a member of Darkness Descends and Children of October ,and surprisingly a Hip Hip act known as the Draf and Retro Glam . However, "Life Lessons&
Post a Comment
Read more
More posts