Showing posts from October, 2020
Show all

Dive Bombs from Heaven : a Tribute to Eddie Van Halen 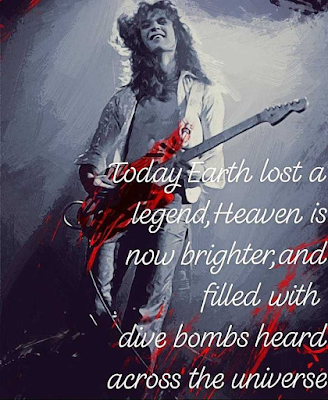 Hi everyone, as all of you know about two and a half weeks ago the Rock World lost a true legend and most likely the greatest, most influential guitar player to ever live: Eddie Van Halen As late as this tribute may seem, and impersonal. Due to the fact that I never had the pleasure of even meeting the man, I'm sure many who enjoyed his music and quite possibly inspired to play guitar because of him can relate to how is truly personal this actually is for me and many others. So where do I begin? At the beginning of course (well for me anyway). Despite the fact that my age wasn't even in the double digits when I discovered Van Halen , I became a fan a little bit later in the game than many. My cousins and their friends had turned me on to Van Halen . I remember taking trips with them to the local mall,clamoring on while in route piled into my Aunt's van while we expressed how awesome we thought that band is. "In his book,they are the best!" my cousin J
Post a Comment
Read more
More posts