Showing posts from September, 2013
Show all

September 24, 2013
I trust that most of you read my last post, so I decided to keep going with this format so that those who brains didn't melt yet could read on. Believe me, I know there is a lot to know and go over beyond songwriting and performance and even if you are the guy in the band that says "they just tell me when to show up and I do" you should inform yourself about the business side. It is not easy even with the advances in technology allowing for the informed to be their own manager/booking agent/record label. Obviously when you are releasing your own album you want to make that you make it sound and look as professional as possible. However this goes beyond the quality of the actual recording and artwork. I thought that this would be best in a Question and Answer format: How do we get our cds made professionally? Your cds need to be replicated and not duplicated The difference is a duplicated cd is like a cdr burned on your computer. These work well and can be sold, howev
Post a Comment
Read more

the Musical Artist's survival guide part 1: the music business and promoting yourself

September 16, 2013
Ok, I have been speaking about this for some time now. A few years back I put together a list of books and webpages I suggest for all independent artists. They will help you learn about the music business and make it easier for you further all your musical endeavors. I have read most of these books(really, I did. I'm not lying) and they can be found at the library and on sites like Ebay or Amazon. If anyone has any other books or webpages that you think are useful please let me know. I will start with the Books and include some webpages for the end. REFERENCE BOOKS The Indie Bible a book that is released yearly that has a list of contact information for record companies, radio stations, magazines, distributors and more that will work with independent bands. It is divided up Geographically and by Genre. The Music Atlas Another Yearly reference book. Not specifically geared towards independent artists. But does have many resources such as record labels and other information bro
1 comment
Read more

Times they are a changing 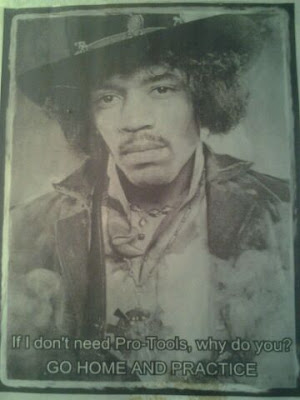 Earlier on in the week, I found myself commenting on a Facebook post by a slightly discouraged musician from a new younger band out of NYC called Candy Brain that feels that the music industry is ruining music for him. I think he was speaking more about the local "seen" which is basically just a staging area and not the be all end of all the music business(Thank God). Luckily, there were a few people like myself to shed some light on this. Years ago, the Record companies decided your fate and very few bands could control their own destinies. Simply because the resources available to us now where not there 20, 25 or even 30 years ago.Remember there was no Itunes or Cdbaby , so no record deal meant no distribution. Yes you could go into a studio on your own and record(if you were lucky enough to even afford that let alone getting your finished product duplicated), hoping a record label would take notice of your valiant effort and offer you some sort of deal which would includ
Post a Comment
Read more
More posts