There's something happening here : the curve is dividing us 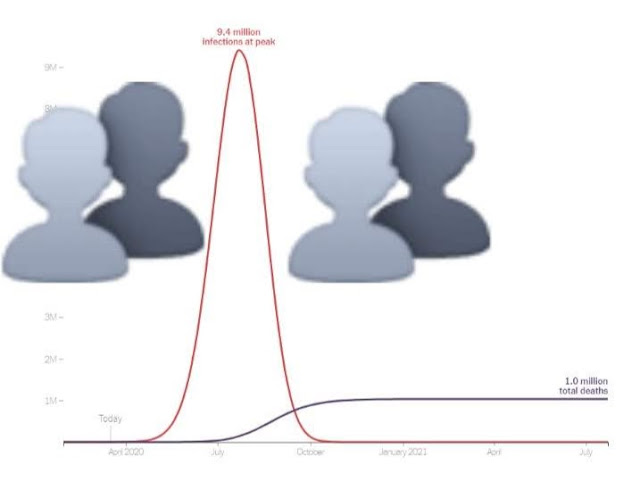 Hello everybody, when news of this pandemic hit I told myself I was not going to write about it. But like it or not, there is really no way of going about your day(whether you're staying at home or going to work, sorry but the word "Quarantined" is not truly by definition what the public is being told to do, look it up) without being inundated by the latest update on this crisis. The news media is supposed to keep us informed but it seems like it entire news segments are dedicated to this directly and indirectly. Not to mention daily press conferences by the public officials. This has obviously contributed to the Widespread Panic which it's already in place due to the fact that the Coronavirus is deadly. However the facts still prove that more people have died of other illnesses that have not received as much publicity. Not to mention the possibility that many of the recent deaths were reported as falsely of being caused by the virus.

One of the things that has really baffled me, is the fact that not only has this turned into a political issue but also like politics, this has driven a wedge between many people over their conflicting opinions, which could have been formed simply by someone having a different sources of information made available to them. And we all know the old saying about opinions don't we?

I myself have noticed people that generally got along with each other are turning on one another. People that were once close friends are no longer speaking. And more superficially,I have also been the victim of many verbal attacks, based on a few posts I made on Facebook and videos I made on You Tube. Before I said anything, I realized that everyone is entitled to their opinion. And I was hoping that there was the possibility of becoming more informed on this topic. Let's face it, nobody knows everything. Even if you research this and watch the news 24/7. Something I don't recommend anyone doing, I think that the Panic the media created is another fine example of the concept that none other than Marilyn Manson had spoken about called "Fear and Consumption"(hence the mass overbuying of Toilet paper and other items). Luckily stores like Trader Joe's have regulated only 2 like items per customer. I was so surprised by the outpouring of comments from people. Mainly because on average most of my posts (which are generally about my music) don't get nearly as much of a response as this. I find that to be somewhat amusing that people that have never interacted with one of my posts prior have such a grand opinion about me, my motivations for doing this and the fact that I should not be doing it. Those who having issue with me making a statement in general, are probably used to the fact that their own rights are being taken away from them that they forgot that everyone has them. I think generally, many of these people simply glanced over the posts, saw only what pertained to them and decided to react accordingly. For those who oppose me, they either decide to unfriend, block me or do so after making remarks. Many times included childish, and unnecessary insults. Which I took with a grain of salt of course. Some of these people posted things that annoyed me and I simply "kept scrolling" as they say. Like Ben Franklin said "I may disagree with what you say,but I will defend to the death your right to say it".As I had stated earlier, many of those who had an issue with what I was saying never bothered to interact with me until that point. Save for maybe one or two people, none of them have ever giving me condolences when I had lost a loved one or congratulated me when I posted about an achievement that I was proud of. Facebook seems to have a lot to do with the perversion of the word "friend". Were these people truly my friends? Absolutely not! Maybe is it should be called "Fakebook". I had noticed that coincidentally,most of the people that decided to disassociate with me are part of a click from the city I live in. I never thought a group that prides themselves on going against the mainstream and is interested in death and other macabre themes would have lashed out at me like this. I know these people personally, and I can attest that I have treated all of them at the very least with respect and consideration. Some of whom I have looked out for as a friend and help promote their events. But in one Fell Swoop, their opinion of me has been altered over a few blinks of an eye without even being adult enough to give me the benefit of the doubt or tried speaking with my privately. Nobody even acknowledged that I gave well wishes to all those who have lost their lives, or provided links along with the videos on how to help saves lives. Overlooked of course because people only dwell on what pertains to them and the negative. Maybe the statement I made referring to people as "Sheep" was too much to handle because we are in fact comfortable with going along with what we are being told without question that pointing it out in such a manner had people up in arms. Maybe they are mad with themselves and decided to project it on to me for pointing it out.

I was trying to get people to think, and to revolt (which by ignoring My request to not comment, they allowed me to achieve this) So getting hated is of no concern (Thank you again Marilyn Manson). My point was grossly misconstrued sadly, even though I don't feel that I failed since I evoked emotion. People saw the object in each statement and not the message. Whether it was being forced to wait on ridiculously long lines (if you know history this was common under the communist regime) or being forced into wearing masks. Noticed the word "forced"? and who is doing the enforcing? These measures are being taken for safety reasons. But no more than a few weeks prior(when it's safe to say we we're more likely to have contracted COVID-19) These measures where not in place when they should have been. They are being enforced for our safety right? Like wearing gloves and washing our hands (which I do religiously) They knew about the effectiveness of these measures from the start right? Again,I'm baffled that many are complying and not questioning this (especially since our World leaders have time and time again have proven to be untrustworthy). Instead I get words put in my mouth and shunned,hence why this Meme of me was created (because many people I tried talking to civilly are still of a high school mentality and have refused to listen and believed what gossip they "heard" with no proof) 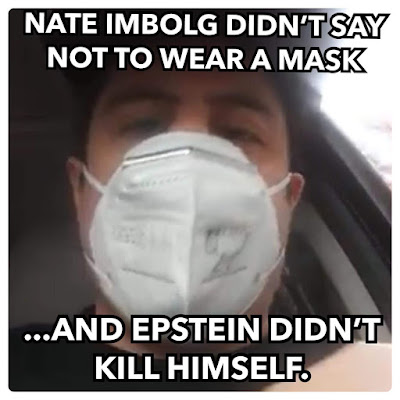 I do not wish to seek the approval or forgiveness of this group. I've been ganged up on before in actual fights and have been bullied, even though I always stand up for myself. Why wouldn't I? if they realized that they were wrong to treat me this way,ego would prevent them from giving an apology (or accepting one for that matter). I think during this time of "social distancing" many of us (myself included) should try to learn social graces like the aforementioned accepting that others have the right to their opinions,giving others the benefit of the doubt and forgiveness just to name a few. Im sure not one of them can name a single song off one of my albums,seen my band play live, or has spoken highly of me when I am not around. I am reminded of something an actual friend told me "Go where you are celebrated,not where you are tolerated".

This however did have a reverse effect, as people who genuinely like,value and love me came forth to show their support sincerely and passionately. And I do thank each and every one of them for doing so. These are people that can vouch for my character and vice versa,so they would not judge me on a whim and assume that I am being disrespectful or wish anyone harm.Because I do not.I learned early on to trust my gut,and something seemed off about the new mandate of being forced to wear a mask.I was also taught to speak out,even if I am the only voice,in hopes of inspiring others,building a sense of unity and help bring about change. This is a Country formed on rebellion,a Country who's people protested so intensely that they stopped a war! It is our right and responsibility to fight for what we believe in.Especially as Rock musicians.The entire appeal that created rock was the rebellion,sticking it to the man,freedom not surrending our rights,ability to think and question without fear. Obviously those who have turned their backs on me are not of this mindset. True the 1960's are long gone and many people didn't experience it first hand. I for one have learned plenty from this era and many topics are still prevalent today : Freedom,Equal rights for people of all Genders,Races,Social and Economic backgrounds. Not to mention valuing the opinions of others and a general sense of community. Which why I chose the first line of a particular Buffalo Springfield song as the title of this entry. Many of the lyrics pertain to what is going on right now (see below)

As we all know, we are all in this together, and life will never be the same again. I truly hope that this brings forth a positive change in society. There is not a single person who has not been effected by this either economically,psychically or mentally. I have been doing my best to check in on all of my friends. We have already shown resilience by continuing our events through live streams from home and I urge everyone to support those who are doing so and to keep doing them.


Thank you for reading this, I know it was long but when the inspiration comes I must abide. And Especially to all who inspired this (even though I know I most of them won't read this).Please Subscribe to my You Tube as I will continue to make more videos with helpful tips.

Stay safe and be Well, Love

I urge all of you to watch this :

The know infamous You Tube video I made that sparked this personal controversy :