Despite being diagnosed with Parkinson's, Ozzy Osbourne soars to the #1 spot on the Metal Charts 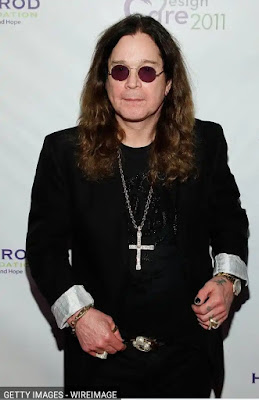 Yes, you heard that right. In The mists of going public about his health issues, the Prince of Darkness climbed to the #1 spot on the Metal Contraband charts this week with the first single off his forthcoming album Ordinary Man called "Under the Graveyard", which features Chad Smith, drummer of the Red Hot Chili Peppers and Duff Mckagan of Guns and Roses on Bass. The second single off Ordinary Man is entitled "Straight to Hell", also features a member of Guns and Roses, Slash on guitar. Other artists that appear on the album include,Tom Morello of Rage Against the Machine, Post Malone and Fellow UK music legend Elton John. Maybe Sir Elton will put in a good word in with the Queen for the Ozzman and he will be Knighted "Sir Ozzy". Has a nice ring to it doesn't it? 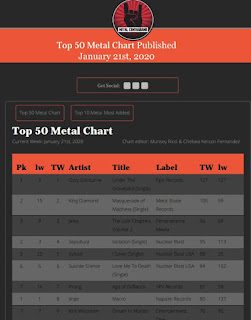 Judging by the sound of these first two songs, I think that Ozzy will once again deliver an album with a great mixture of his modern solo sound and the bare-bones, nitty gritty style that put him and Black Sabbath on the map many moons ago. Although I'm sure like with most of his previous releases, there will definitely be a few surprises. Ordinary Man is set to be released by Epic Records on February 21st, according to Rolling Stone.

I hope that with all these great things going on for Osbourne, they will once again overshadow his personal struggles and allow him to have many more lively and successful years to come. Ozzy grew up in poverty and started out singing with the band that would become Black Sabbath (originally named Earth) in their hometown of Birmingham England.

If you have been reading my last entries, than you probably have seen the Metal Charts from previous weeks.I must say it was truly a blessing to be on the same chart for the past few weeks as one of my main musical inspirations. Unfortunately, Imbolg did not make the charts this week and I was hoping to at least have been bumped out of our exact spot from last week by Ozzy, but it is still great to have had this insight into how the charts and radio airplay work.Special Thanks goes out to Munsey Ricci and Chelsea of Skateboard Marketing and Nelson Fernandez of Metal Contraband for making this article possible.

Please see the embedded links above for more info on upcoming charts and other Metal News, and be sure to check out the new Ozzy Osbourne songs here :